Happy Hour with a Crypto Twist 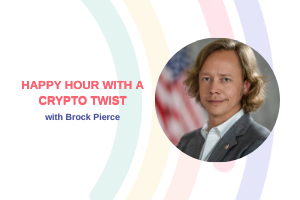 We will gather again for a happy hour in EO Member Tali’s backyard to hear 3 incredible speakers from the crypto world:

About Brock Pierce:
Mr. Pierce began his working career as a child actor, starring in movies such as The Mighty Ducks and the First Kid. He has co-founded, advised, and funded over 100 companies. He is a recognized philanthropist, and even ran as an independent candidate for the President of the United States (garnering over 45k votes across the 16 states he made the ballot).

As a trailblazing innovator, Mr. Pierce created the first major marketplace for virtual goods in online gaming. In 2013, he co-founded Blockchain Capital, which pioneered the world’s first tokenized investment fund and the industry’s first security token. As part of his work with Mastercoin, he helped create the first Initial Coin Offering (ICO) kicking off a worldwide ICO craze with hundreds of startups raising billions of dollars. In 2014, Mr. Pierce co-founded Tether, a “stablecoin” because it maintains $1 dollar in reserves for each tether issued, and it became one of the most traded cryptocurrencies with annual trading volume exceeding $10 trillion. In 2018, Forbes Magazine named Mr. Pierce one of the top 20 wealthiest people in crypto with an estimated net worth between $700 million to $1.1 billion.

About Adrian Baschuk:
Adrian Baschuk, a Miami Beach native, is currently the COO & Strategic Advisor for Ethernity Chain, a leading NFT platform issuing licensed NFT assets across fields, notable figures, and mediums including art, AR/VR, and virtual world integrations. He is a Co-Founder of Crypto Banter, a daily livestream of the overall crypto community0 and Producer of CNBC’s “Crypto Trader,” the world’s first major network broadcast program on blockchain and cryptocurrencies.

About Eryka Gemma:
As the Venture Director at a Digital Asset Hedge Fund, Eryka is well versed in bitcoin’s underlying technology, the blockchain. In 2019, she co-founded Blockchain Center Miami with the goal of making Miami the crypto capital of the Americas. Over the years, Eryka has taught hundreds of people how to safely navigate the cryptocurrency space.